Excerpt from ‘A Year at the Yard’ by Ken Lake….

“On Christmas Day the owners will gather here at about 9 o’clock then there will be a morning ride down to the church. The ponies can be tied up outside while the owners go in for the carol service and nativity play. There will be free mince pies and sherry or orange juice for the riders and oats and carrots in feed bowls for the ponies. After that you can all come back to the yard for a little Christmas party.” “Oh that sounds wonderful Jim. Will you be riding down with us?” “Err well no Mrs Dodger. You see, even though I am the oldest stable hand in the world I have never learned to ride a horse.”

“Oh Jim that’s a real shame. You are a very important person at the yard. We don’t want you to be left out. I hope you can come to the party anyway.”

“Oh yes I wouldn’t miss that for anything.”

It was late on Christmas Eve. The night was crisp and bright, the full moon lit the whole yard and there was a light dusting of snow on the stable roofs. Everyone had gone home, even Jim, and it was so quiet. A distant owl hooted but that was all. Lofty stood on his box and looked over the stable door at the twinkling stars. He recognised just one of the shapes made by the stars. People call it the Plough and he remembered that the two stars at the end of the Plough point to a brighter star called the Pole Star. It shows which way is North. As he stood there dreaming, he saw something strange, something very unusual up in the starlit night sky. It wasn’t moving especially quickly but it was odd. He had never seen anything like it before. Should he tell the other ponies? Would they laugh at him? Yes they probably would. After all how do you explain a sleigh being pulled by nine flying reindeer, one of them with a red nose? On the sleigh driving them was an old man with a white beard and a red suit. The old man saw him watching and waved, and Lofty was sure he shouted “Merry Christmas” and “Ho, Ho, Ho!” 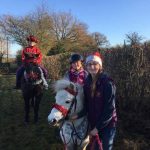 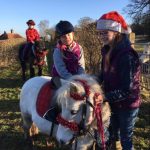 ‘A Year at the Yard’ by Ken Lake

« Sunday Schooling » Half-term visit to the Grandparents
We use cookies to ensure that we give you the best experience on our website. If you continue to use this site we will assume that you are happy with it.Ok