I know its been a while but we’ve had an interesting few months and its been a bit difficult to see the funny side of life.

Today however it was clear that our crazy life was back. I’m not sure if its just life or it has something to do with the 4-leaf clovers that Saskia has found, I cant tell you where but its definitely real!

As often happens to children, we grow and this means we grow too big for our beloved ponies which is sad. It also means we get a new pony which is happy and exciting. These are mainly my mums words, she often asks me to stay small and cute and I have to remind her that I can’t, I’m just going to grow up.

Saskia has grown too big for her amazing pony Aeroplane, so my mum has found her a horse called Spitfire. He is nearly 5yrs old and 15.2hh, he’s quite a baby, but is sweet and keen to learn. I’ve also grown a bit so I get to have Aeroplane which is absolutely fantastic. 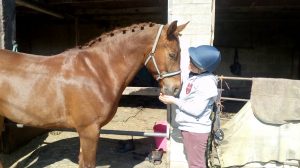 Saskia has done lots on him so I can go straight out and compete him. The sad news is that we have to find new homes for Rowan and Revel, but mummy says she will make sure they go to loving homes that know how to look after ponies and they can have lots of fun with some smaller children.
So, going back to today. It didn’t start well as myself and Saskia didn’t quite get all our kit ready for dressage, my jods were too small and Sas didn’t have a shirt. Mummy was a bit cross as she’d asked us on Thursday, Friday and Saturday to make sure we had everything ready. In my defence I thought it was all somewhere in my bedroom, but mummy was more than a bit angry and this was before we’d even left the house.

When we got to the yard (after mummy had sorted all the issues out) we got our ponies ready to do our Dressage test, we groomed, plaited, painted hooves and cleaned our tack and boots. I was a bit nervous as it was my first time competing in dressage on Aeroplane but I really enjoyed riding him and he was a very good boy. Here’s where the crazy starts…. as soon as we finished our dressage tests we had to put the ponies on the lorry and drive to a Pony Club Rally, apparently mummy is trying to get us both completely ready for our first ODE next Sunday. When we arrived some pony club mums were knelt in the sand school and started to wave to mummy (for those of you who don’t know my mum is a Theatre Sister and lots of people call her “Trauma Nurse” as she is super calm in medical emergencies) to come over, “ I think there might have been an accident” she said.
It turns out that the child had cleared the jump and landed on her head whilst the naughty pony had stopped and not bothered to jump it.  An ambulance was on the way and the little girl turned out not to  be injured.
I had  a lovely SJ lesson on Aeroplane who is just amazing, the only thing I have to do is stop kicking because he is so honest he doesn’t need it. Sas and Spitfire also had a great lesson. Then we got back on the lorry. 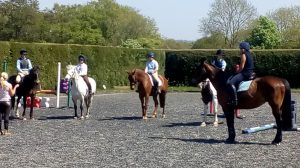 I’m not really sure why the lorry wouldn’t move, it happened a few weeks ago in Petworth and caused a massive traffic jam and caused my mum to say words I’m not allowed to say, we thought the mechanic had fixed it but apparently something else needs to be fixed too. My mum said she needed to cool something down to get it going and asked us for the bottle of water we were drinking but before I could pass it over she grabbed a can of de-icer and sprayed the whole can under the lorry, I’ve no idea what she sprayed but the brakes came off and we got back to the yard.
The good news is that when we returned I found out that I had come 2nd in the Dressage and Saskia had come 4th. 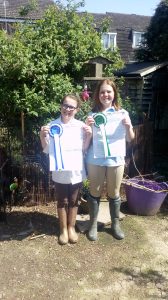 Life has it’s up’s and downs, but sometimes I feel like I’m on a roller-coaster.
My favourite book this week is Spirit & The Magic Horsebox
« Martha’s Christmas

We use cookies to ensure that we give you the best experience on our website. If you continue to use this site we will assume that you are happy with it.Ok