After last week’s adventures this week seems a bit boring, I’ve had loads of homework from school, each subject is meant to take about 25 minutes, but I just can’t help taking longer to get it done. Mum says it’s really important to do well at school so I can get a good job and be able to afford a horse…or even a house, when I’m a grown up.

A couple of weeks ago when we were coming home from Autumn hunting mummy decided we should get a cat and not a kitten as we’re busy. She called Cats Protection to see if we could adopt a rescue cat, but by an amazing chance one of her friends’ mum needed to re-home her cat and very excitingly we were able to re-home Loki (aptly named after the Norse God of Mischief) who is a tabby cat and like me he’s 11years old!

Unlike me, he’s very fluffy and likes to hide under the bed during the day.

He wakes Mum up dancing on her face at 2am, then he cuddles up for a while, only to start climbing the shelving and ripping the ‘Dreamies’ packet open and he’s very noisy!

After finishing my room my sister Anna, who’s 14 wanted her bedroom decorated, being a teenager she wanted it to happen yesterday, but Mum asked her to clear her room out first.

SHE DIDN’T, so mummy started to paint it anyway. Finally Anna decided that it might be a good idea to move her beloved belongings to make it easier to paint.

Then…. Mummy BROKE the WASHING MACHINE!!!! 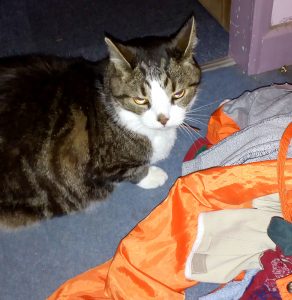 Loki looking disapprovingly at all the washing

This is one of the WORST things that can happen according to Mummy as we need to do more washing than some small countries. Mummy also says the washing machine is possibly the most important, time saving invention that helped women to become EQUAL (her words).

She then decided to fix it HERSELF!

So, using YouTube on repeat, she stripped the PUMPY-FILTER THINGY (that’s what she called it) cleaned it out and…it WORKED!! 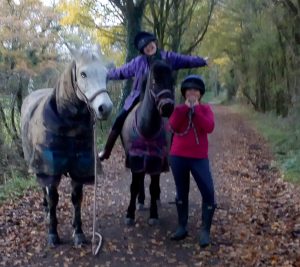 This week’s featured book is Horses, Divorces & Hissy Fits. Ideal for anyone with teenage sisters!

« Broken Buttons, Missing Chaps and a Celebrity Hitch-hiker. » A Trip or Two to Casualty!