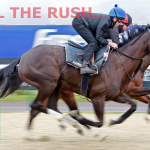 I wish I’d known about this when I was young enough and light enough to be a PONY RACER!

The ‘Hairy’ Pony Racing Finals will be held at Paraham Point to Point on April 29th, where there will also be two ‘Open’ classes for non-hairies/traditional thoroughbred types as well as plenty of adult races.

The Pony Club encourage lots of young riders to ‘give it a go’ and the response from those who have is tremendous.

“I first raced on my pony against my brother when I was just six years old, we’d race around our field and Mum would draw a winning line and wave a flag. I always won!” Ben Jones, Cheshire.

You don’t need to have a sleek, long-legged mini thoroughbred-type pony, to experience the thrill of racing. Rob the Cob may initially be surprised, but if he’s encouraged to get fit slowly, he’ll soon be flying around the field with his fetlocks blowing in the wind behind him 🙂 so there’s no excuse not to give it a go!

If you want to be inspired and get a small taste of what it’s like to race, without leaving the yard, read PONY RACER by Lucy Johnson.

It starts with Tom moving in with the Heaven family, who own a racing yard in Devon. Tom has had a rough start in life; he doesn’t get on with his mother and has spent a lot of time in foster care. He finds it hard to make lasting bonds and it takes Leo, a pony owned by the Heavens, to convince Tom that he has a lot to offer and that some people can be trusted. 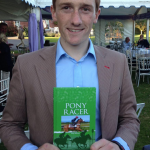 “You get a real sense of what it’s like to race, when you read this book” Sam Twiston-Davies

Ideal for riders 9yrs+ but Mums and Dads will love this too. Great for reading together.

« Visit to Ride High is a resounding success » Meet Hamish the Clydesdale
We use cookies to ensure that we give you the best experience on our website. If you continue to use this site we will assume that you are happy with it.Ok